Interview with Richard - a British expat living in Taipei 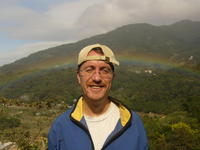 Richard, a British expat living in Taipei, has moved to a slightly different beat since he relocated to Taiwan 18 years ago. Though he initially came to teach English, he now gives private piano lessons, and spends time freelance writing and editing. You may recognise him as the author of "Taipei Day Trips: I and II", and if not, all the better reason to familiarise yourself with the publications.

Otherwise, follow Richard on his blog, "Off the Beaten Path" and stay tuned for his guide to hiking trails in Taipei.

A: I’m from Kent, just southeast of London, England.

A: I’ve lived in Guandu, a suburb on the northern edge of Taipei, the capital of Taiwan

Q: How long you have you lived here?

A: I’ve been in Taiwan for eighteen years.

A: I’m a confirmed bachelor!

A: I came to Taiwan to find work as a teacher. I now teach piano privately and work as a freelance travel/music writer and editor.

Q: What do you enjoy most about Taipei, how’s the quality of life in Taiwan?

A: Taipei is a wonderful place to live! Very friendly, convenient, safe and relatively inexpensive (by Western standards). Expats will find marvellous food; a city well connected with many fascinating destinations in southeast and eastern Asia, Australia and even the Pacific; and an urban centre surrounded by beautiful countryside that’s fabulous for hiking.

A: The culture is profoundly different from back home in England, and although exotic and constantly fascinating, still frustrating sometimes.

A: From a security standpoint, Taipei is perhaps the safest big city I’ve ever been in, and I feel safe walking round anywhere in the city, even at night. On the other hand, many of the locals are pretty bad drivers and drive by a logic quite alien to most western drivers. There are lot of minor accidents on the roads, and driving is undoubtedly one of the most frustrating aspects of day-to-day life here. Luckily the city’s public transport system is very good, and very foreigner-friendly these days, with comprehensive English language translations on bus, train and Mass Rail Transit (MRT) routes.

About living in Taipei

Q: Which are the best places/suburbs to live in Taipei as an expat?

A: For convenience, those with families tend to live in Tianmu, in the north, which is close to the main International schools (the American and European Schools); expats without kids often prefer the more modern surroundings of the new city centre, in eastern Taipei, near Taipei 101. Others live up on Yangmingshan, the mountainside to the north of the city, as it’s cooler up there in summer, and the secondary school campus of the European School is located there.

I (and many others) prefer to live in one of the more traditional Taiwanese suburbs on the fringe of the city, where apartments are cheaper (even in the many new apartment blocks going up all the time), the air quality is better (although these days it’s not bad in central Taipei either), the environment is nicer, with the hills within walking distance of my house, and the ever-growing MRT train lines put most of the city suburbs within 30 minutes of the main train station and the old city centre.

Q: How do you rate the standard of accommodation in Taiwan?

A: It’s greatly improved in the last decade, with many old apartment blocks being pulled down in favour of modern high-rise apartments.

Q: What’s the cost of living in Taiwan compared to home? What is cheap or expensive in particular?

A: Compared to England many things are much cheaper, food, especially.

A: The locals are extremely friendly and curious about Westerners, and are increasingly able to communicate in English. It’s easy enough to mix only with other foreigners outside of work, with various clubs and organisations designed to get expats together, but generally it’s easy and very rewarding also to make local contacts as well.

About working in Taiwan

Q: Did you have a problem getting a work visa/permit?

A: Initially yes, because a degree is required for English teachers to teach here legally, and the Taiwanese aren’t very aware of the English three-year degree system. I had to get proof that my music diploma was a degree equivalent before I was granted a working visa.

Q: What’s the economic climate like in Taipei, is there plenty of work?

A: For English teachers, there’s lots of work. My line of work, as a music teacher, also has plenty of scope for development, although in Taiwan, getting a job is made easier if you have the right contacts.

A: Workplace politics are a complicated issue in Taiwan; the Taiwanese are very accommodating of Westerners, who aren’t expected to know all the in’s and out’s of workplace etiquette here, but it pays to understand something about the complex system at work in the workplace environment, and there are resources available for helping Westerners understand a bit more about it.

Q: How would you rate the healthcare in Taiwan?

A: Pretty good. Medical professionals and facilities here are equal to those in the West, and the national health system here is much better than in the UK.

Q: Is there any other advice you like to offer new expat arrivals?

A: Taiwan has a huge amount to offer Westerners that take the time to discover the island and its culture. Nowadays, Taipei is a modern, westernised city and it’s certainly possible to live a life similar, in many ways, to one back home in the West, but it’s less frustrating to make a few simple adaptations to the local way of life. Many people end up falling in love with the island and staying far longer than expected. There’s an enormous energy here which combined with the beauty of the island, the friendliness of the islanders (especially towards foreigners), and the intact and constantly fascinating Chinese culture, proves extremely stimulating; but first you'll need to get over the cultural differences.

> Are you an expat living in Taiwan? We'd love to hear your story. Open the questionnaire here, copy into an email and send it back to info@expatarrivals.com