As somebody who works in the Netherlands, you have probably already noticed a large amount of payroll tax (so-called loonheffing) listed on your salary slip. But have you ever tried to figure out how this amount is calculated? Or how this affects your total tax bill? In this article, the tax advisers at Finsens take you through the basics of the Dutch income tax system.

Individuals resident in the Netherlands are liable to income tax on their worldwide income. In order to avoid double taxation, bilateral tax treaties have been concluded.

The Netherlands also has unilateral provisions that apply in general to situations where no treaty has been concluded with a particular country or where a tax treaty does not include a provision pertaining to a specific case.

In the Dutch income tax system there are three categories of taxable income, each referred to as a ‘Box’ and each having its own rate:

The income tax payable is the total amount of tax on the taxable income in all three Boxes.

The tax payable on taxable income from work and dwellings (Box 1) is as follows:

Taxable income from a substantial interest in a legal entity is taxed at a flat rate of 25%.

The tax levied on income from savings and investments is based on the assumption that a taxable yield of 4% is made on the net assets (e.g. from interest, dividends, capital gains and losses) irrespective of the actual yield. The assumed yield of 4% is taxed at a flat rate of 30%.

Taxable income from work and dwellings is the total of:

A taxpayer is regarded as having a substantial interest in a legal entity (for instance a B.V.) if he/she, either alone or together with his/her partner, directly or indirectly holds at least 5% of the shares in the legal entity.

Some examples of assets and debts that fall into Box 3 are:

The net assets (the fair market value of the assets after the deduction of the fair market value of the debts) are valued at the average for the calendar year and are therefore noted on two reference dates: 1 January and 31 December. In Box 3 taxpayers are entitled to a tax-free threshold of €20,661 (tax-exempt capital). If you have received dividends on your investments and dividend tax is withheld, that dividend tax can be offset against the total tax bill.

Besides paying tax on the aforementioned income, you are also entitled to deduct personal allowances. The tax-deductible items of expenditure are:

Every personal allowance has its own specific threshold, ceiling and conditions.

The total tax bill is determined based on the income in the three Boxes and the personal allowances.

The total tax bill is reduced by deducting tax credits. There are more than 10 different tax credits, and their applicability depends on your personal circumstances. The most important ones are:

The payroll tax on your wages is considered to be an advanced levy of tax and will be offset against your income tax bill.

Here is a simple calculation table for working out your taxable amount: 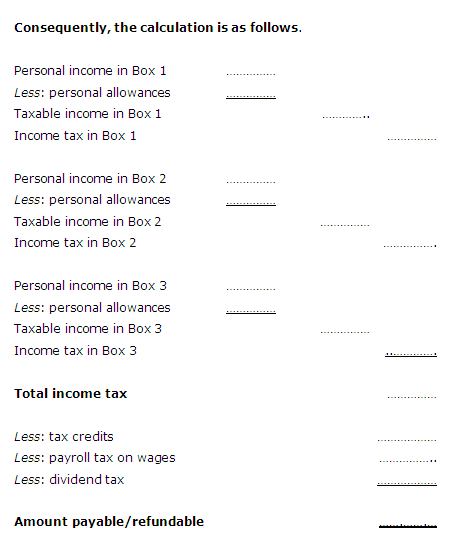 ►Learn more about moving to the Netherlands