An interview with Tim Doel - A British expat in Milan, Italy 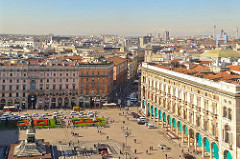 Tim Doel and his wife relocated from the United Kingdom to Milan in 2016. Being married to a local, he has a unique take on living and building a family in one of Italy’s busiest cities. He shares his advice on how best to settle down and establish roots for expats moving to the city.

Find out more about expat life in the Expat Arrival's Milan City Guide or check out more Expat Experiences in Italy.

Q: Where are you originally from?
A: Bucks, United Kingdom
Q: Where are you living now?
A: Milan, Italy
Q: When did you move to Italy?
A: May 2016
Q: Did you move to Milan alone or with a spouse/family?
A: With my wife
Q: Why did you move; what do you do?
A: We were looking to settle and start a family, and as my wife is Italian, she had friends and family nearby

Q: What do you enjoy most about Milan? How would you rate the quality of life compared to the United Kingdom?
A: I like the weather first and foremost, the long summers, the nearby lakes and trips you can do from Milan by train or car that are quick and easy. The food is easily as good as its reputation suggests, too. The quality of life I would say is as good as the UK as long as you have a steady job and home.
Q: Any negatives? What do you miss most about home?
A: Tax is very high in Italy, especially if you are self-employed, and the exchange rate took a turn for the worse after the UK referendum. Bureaucracy is also a real pain compared to the UK, even though things are starting to go online now which is better.
Q: What are the biggest adjustments you had to make when settling into expat life in Milan? Did you experience any particular elements of culture shock?
A: I'd been over for a year or two in my early 20s, and every year a few times for a decade, so I'd like to think we had a good idea of what to expect. Having a reasonable level of Italian makes a huge difference.
Q: What’s the cost of living compared to home? What is cheap or expensive in particular?
A: Due to tax and the bad currency rate changes from sterling to Euros, it's not much cheaper to live here in Milan than in the UK right now. Food is maybe a little cheaper, technology and cars a little more expensive.
Q: How would you rate the public transport in Milan? What are the different options? Do you need to own a car?
A: I have a car as I live on the outskirts of Milan and find it more liberating. The Metro underground system is adequate and efficient, but like most big cities can be uncomfortable and dirty at times. There are buses and trams, and many taxis if you are going to or from a larger train station. Three airports is also a great benefit as it makes trips back to the UK doable.
Q: How would you rate the healthcare in Milan? Have you had any particularly good/bad experiences with regards to doctors and hospitals? Are there any hospitals you would recommend?
A: Yes we had our first child here in Italy, at Vimercate just outside of Milan - it was renovated in the last few years and was efficient, clean and professional. We couldn't recommend it enough. There are also many health checks to do before giving birth, especially if you have a private doctor for the period, which many people tend to do, and that is reassuring during pregnancy.
Q: What are the biggest safety issues facing expats living in Milan? Are there any areas expats should avoid?
A: I think crime around Milan is a serious issue - I've not been subject to any as of yet, but like in many big cities it is something to keep vigilant for. In the centre of Milan it seems quite safe, the safety in suburbs of the city depends on the area itself, but a visitor is unlikely to find themselves outside the centre without intending to.
Q: How do you rate the standard of housing in the city? What different options are available for expats?
A: Housing in Milan is expensive - for renting it is both expensive and often poor quality. Moving a little out of the city is better value for money, but you lose the proximity to the city which is a big pull. Buying property is complex and expensive too.

Q: How tolerant are the locals of foreigners? Is there any obvious discrimination against particular religions or women etc.?
A: I would say the locals are quite welcoming and interested in the arrival of an English/American visitor or expat - I'm not sure people of ethnic minorities would share the same welcoming impression. Women I think are generally well respected and can be found in positions of management, and in the right job, given opportunities even if having a baby could occur soon. This isn't the case throughout Milan or the country, but it's absolutely possible, especially for those established in their career paths. For graduates, or others starting off on their career path, they could be overlooked, however.
Q: Was it easy meeting people and making friends? How did you go about meeting new people?
A: For me, it was slightly easier since I've known the partners of my wife's Italian friends for a few years. I have been to some expat meetups, which can be useful, although often there are people who are not there for the long term

About working in Milan

Q: What’s the economic climate like in Milan? Do you have any tips for expats looking to find a job? Which resources did you find most useful?
A: Digital media seems to be a booming industry, this is especially good if you have some experience. Also, English mother tongue copywriters or editors have opportunities here. Other options for expats are with relocation companies, or teaching, although neither initially offer great security or pay. It's true that a knowledge of the Italian language gives you a significant advantage over someone who does not speak Italian.
Q: How does the work culture differ from the UK? Do you have any tips for expats doing business in Italy?
A: In Milan, the culture is more to work hard to meet deadlines, sometimes staying late in the office. Staying until 6pm is normal, so it can be a stressful environment. If you're able to get a safe and enjoyable job though, then the lifestyle you can enjoy as a result is really something

Q: Did your wife have problems adjusting to her new home? Do you think there are any specific challenges for a trailing spouse?
A: We didn't experience too many issues, but mainly since my wife is Italian. I do know of people who have moved over for work, and their partner has had to come with them. My advice is always to learn the language, learn about your new city, and train or look for employment that will give them their own identity within the city. Stay at home partners can also look to start groups, either with Italians or for expats, since there are many nationalities in Milan.
Q: What are the schools like, any particular suggestions?
A: My daughter is too young to be thinking about school, but in and around Milan there is a good level of schooling. Many expats prefer to put their children through an international, fee-paying school like The British School of Milan, that use a British curriculum.

Q: Is there any other advice you would like to offer new expat arrivals in Milan?
A: Learn the language, keep positive, meet people, embrace the difficult moments that will arrive, take time to travel around the city of Milan and learn about the culture. Then it will all be worth it.
~ Interviewed March 2018

►Learn more about expat life in Italy in the Expat Arrivals Italy Guide.